Located in Padasjoki, southern Lake Päijänne, the 8-kilometre-long Kelvenne is one of the largest esker islands of Finland. Despite the largescale plans for holiday resort development of the 1960s, Kelvenne has remained an unbuilt island and is part of the Päijänne National Park that was established in 1993. It is also one of the most valuable sites of the Salpausselkä Aspiring UNESCO Global Geopark.

Kelvenne Island provides hikers, boaters and paddlers with wonderful sandy beaches, pine forests and groves of leafy vegetation. Sheltered, deep kettle hole bays serve as natural harbours, and a 9-kilometre-long hiking trail runs through the island. Hiking along the marked trail is a good way to explore the beautiful shoreline landscape, as well as the forest terrain on the interior parts of the island. The trail occasionally rises up to the top of the esker, extending from Kirkkosalmi to Likolahti. There are several campfire sites along the route. Lovely beaches can be found at Kirkkosalmi, Hinttolanhiekka, Kyyränlahti and Isohieta, among others.

The archipelago nature is sensitive to erosion and disturbances, so please help us preserve it. Follow the park regulations and outdoor etiquette, respecting nature and fellow hikers. https://www.nationalparks.fi/en/hikinginfinland/visitorguidelines.

Kelvenne can only be reached by boat. The municipalities of the area – Padasjoki, Asikkala and Sysmä - have guest harbours with services, and entrepreneurs offer taxi boat, cruise and ferry services. Kelvenne is a popular paddling destination and kayaks can also be rented from Padasjoki, for example.

Traces of the Ice Age

Kelvenne Island was formed around 11,500 years ago at the end of the last Ice Age. Gravel and sand, carried and sorted by the meltwaters from the continental ice sheet, were deposited at the bed of a glacial meltwater stream, while the margin of the melting continental ice sheet was slowly withdrawing.

There are several deep kettle holes in the island. They formed when large blocks of ice were detached from the melting continental ice sheet and got buried in the sand and gravel deposited by the glacial meltwaters. As the ice melted, the land around the blocks collapsed forming the pitted kettle landscape. Some of the kettles have turned into small mires and one into a small clearwater lake, called Kelvenneenlampi. Unique features of the island include deep bays formed by kettle holes which lie underneath the water level on the sides of the esker. These sheltered bays are used as natural harbours. The water at the bottom of the kettle bays remains cool even during the hottest days of summer.

Kelvenne is part of the picturesque chain of esker islands between the open waters of Hinttolanselkä and Tehinselkä. The islands and the underwater ridges between them form an impressive continuum stretching all the way to the continent. At its highest point, Kelvenne rises more than 50 metres above the surface of Lake Päijänne. 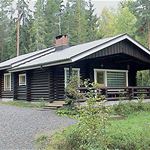 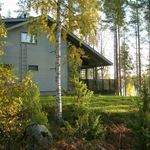 Расстояние: 9,5 км
A holiday village in Padasjoki, by Lake Päijänne and close to Päijänne National Park. There are four cottages for 7+3 persons and two cottages for 12+3 persons. Only 2,5 hour trip from Helsinki by car.
Забронировать 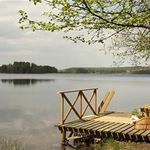